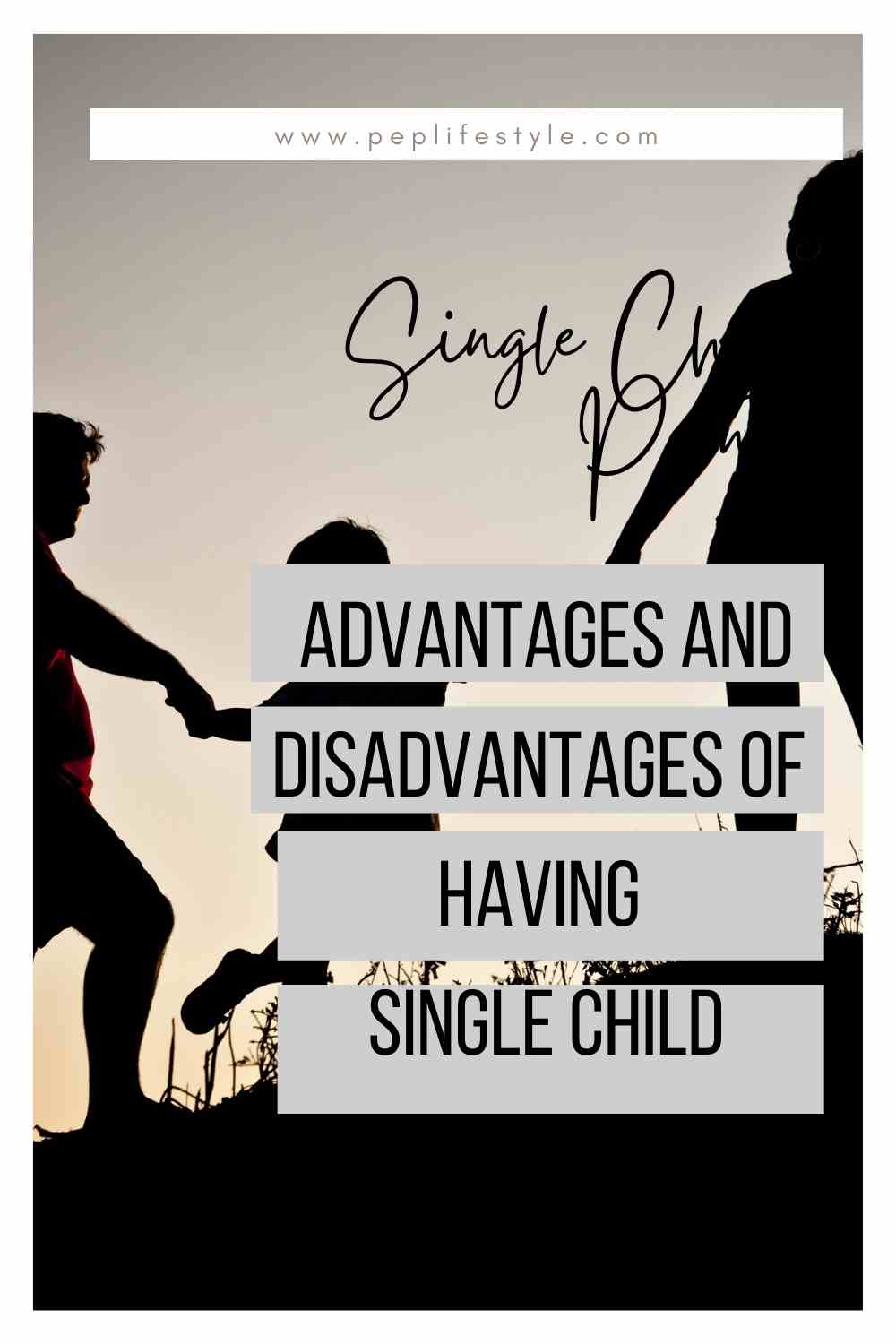 Advantages and disadvantages of having single child

Most couples who marry or decide to live together intend to start a family.

Having large families was popular a few years ago, and it was considered a benefit.

This was due to the fact that children began working at a young age to help support the family.

However, as the world changes and the expense of living rises year after year, having a large family is no longer regarded as a viable option.

In fact, a growing number of couples are considering having only one kid, and some have no desire to have children at all.

My partner and I decided to have one child and we think it’s one of the best decisions of our life.

This blog will tell in-depth about the advantages and disadvantages of having a Single child.

The trends in having children

The studies show that:

Women with higher levels of education have fewer children.The number of children a woman has is related to her educational degree.

The number of children born to women aged 45-49 years old in 1986 and 2016 by their educational level (i.e., bachelor’s degree or higher, other post-secondary qualification, and no qualification).

Women in their late forties with a degree or higher qualification had the highest rate of no children (18%), while women without any post-school qualifications had the lowest (17%). (Source)

By 1996, the most typical family size was two children, and this has been consistent since then (38-39 percent ).

This represents 20% of the total child population, up from 10% fifty years earlier.

The stigmas associated with being an only child

Despite the fact that we live in contemporary society, there are still some stigmas associated with being an only child:

The Only children were described as pampered, selfish/self-absorbed, maladjusted, domineering, antisocial, and lonely by their parents.

It is the belief of those who subscribe to the notion that only children are pampered because they are accustomed to receiving anything they desire from their parents, including full attention.

The fear is that kids may develop into self-centered persons who are solely concerned with themselves and their own requirements.

It is also thought that a lack of connection with a sibling contributes to feelings of loneliness and antisocial tendencies.

Some believe that these impacts last throughout adulthood, with only children experiencing difficulties getting along with coworkers, exhibiting hypersensitivity to criticism as they get older, and displaying poor social skills as a result of their upbringing.

However, while this idea (along with birth order hypotheses) has found its way into popular culture, it is also generally baseless in scientific terms.

He or she has a hard time interacting with others.
He or she has a higher chance of being unwell.Only children, on the other hand, do not always display these characteristics.

In more recent study, it has been demonstrated that being an only child does not always distinguish you from a classmate who has siblings.

Furthermore, the absence of a brother or a sister does not imply that you would become self-absorbed or antisocial.

However, there are significant benefits and drawbacks to having only one child:

Advantages of having one child

An only kid develops a strong bond with his or her parents and enjoys close contact with them.

An only child has the finest of everything, both material and non-material. A lone child receives his or her parents’ full attention.

There are no other siblings for an only child to deal with.
An only kid does not have to compete for his or her parents’ attention with other siblings.

An only child will not be compared to another sibling (consciously or unintentionally).
An only child is more self-sufficient.

Disadvantages of having one child

At school  my daughter was showing off her new shoes, and another mother said to me, ‘Well you can afford to buy your kid the world when you only have one’.”

A Professor at the University of Texas, who has spent more than three decades investigating single-parent families, is unsurprised by such resentment.

She’s preparing to start a study to investigate if people who have “suffered through the experience of bringing up multiple children” think adversely of women who have only one child.

Parents who have only one child benefit from “reduced stress and strain; ability to pursue your own interests; spontaneity, [and] a bond that develops between parent and child,” according to Dr Newman.

It is said that having only one child made things easier for the child’s mother in terms of logistics, as well as the impact it had on their experiences and bond.

According to Research , only children are not lonely.

According to research, societal pressure to have more than one kid is likely based on “deep-seated and presumably unconscious prejudices inside the human mind,” and that having at least two children increases rather than decreases the human race.

Is it worthwhile to be a mother?

Many new mothers can relate to the phrase “nobody warned me.”

That’s especially true when you’re miserable, peeing your pants at every sneeze, and feeling insecure in the face of Instagram’s idealised portrayals of motherhood.

However, it is stated that the environment was also a factor in parents’ decision to have a one-child family.

“However, studies in China and the United States suggests that only children are no more lonely than siblings… since most parents with one child encourage peer connection.”

The negative stereotypes about only children- Myth Busted

Myth #1: Only children are demanding and aggressive.

Fact: Only children rapidly learn that attempting to rule the show, which they may be able to get away with at home, does not work with their peers.

A demanding, confrontational demeanour is a surefire way to get excluded from the group. Only children desire to be included and accepted because they don’t have siblings.

According to studies, parents can play an important role in ensuring that their only kid “plays well with others.”

Myth #2: To make up for their loneliness, all only children create imaginary friends.

There is no scientific evidence for this. Professor of psychology and child research at Yale University, Jerome Singer, PhD, agrees that creativity is necessary.

Myth #3: Children are the only ones that are spoilt.

Fact: Being spoilt is a reflection of our society, not of one’s siblings. When the Chinese had an only-child policy, they feared they were breeding a generation of “little rulers.”

Researchers discovered that only children are not particularly spoilt 30 years later.

When comparing lone children’s connections with friends to children who had siblings, they found no differences.

Myth #4: Only kids are egotistical.

Fact: Every child believes the universe revolves around him at some point in his life. “To be selfish is to think about yourself rather than others,”

A child who is unable to see things from another’s perspective will appear selfish.

There are times in people’s lives when their vitality is removed, one of which is adolescence.

Hormonal changes and physical growth are particularly difficult during that time, and the energy to focus on others simply isn’t there.”

In the absence of siblings, parents develop the skills of sharing and empathy.

Because of the confidence and faith that children have in their parents, they are the best early educators. At times, all parents might anticipate their toddlers and teenagers to be selfish.

Myth #5: Only children are reliant on their parents.

Fact: Only children are more self-reliant due to adult instruction and the lack of siblings to lean on.

They are frequently more self-sufficient than those who have brothers and sisters to look after.

Myth #6: Only children mature at a rapid rate.

Fact: Siblings are more closely related to and talked to by children than their parents. Parents are the key role models for an only kid.

As a result, only youngsters imitate adult behaviour and speaking patterns, allowing them to develop good reasoning skills at a young age.

This better prepares children to deal with the ups and downs of adolescence. Definitely a nice thing.

Even in the 21st century, having an only child or siblings remains one of the most hotly contested subjects. It is a fallacy that only children are typically more selfish than those with siblings.

Individuals say they are privileged and lonely.

The reality, however, is that parents typically engage in novel and inventive activities with their child, therefore spending quality time with her.

When they find it difficult to participate in the kid’s world of imaginative inventions and activities, they are more likely to include and engage the child in their own world by, for example, taking them to the movies, arcades, amusement parks, etc., than normal.

This pulls the youngster considerably closer to her parents and strengthens their familial relationship.

Is it easier to raise a child who is an only child or children who have other siblings?

It’s no surprise that being an only child comes with a variety of advantages and disadvantages.

In particular when it comes to advancing one’s own personal growth.

Your children will develop a more unselfish attitude as a result of having a sibling.

There are certain children who do not benefit from having siblings, despite the fact that research says that having siblings will help your child develop empathy.

But as parents, in your opinion, whether situation is preferable: having an only kid or having several children?

We are aware that caring for more than one kid can be challenging for you, much more so than it can be difficult for the children to compete with one another for your attention.

And the very first logical obstacle that you are going to have to overcome is the expenditure of money and the effort that will be required to satisfy both of the children at the same time.

The fact that the children span such a wide range of ages and have such varied requirements further complicates the situation.

The Key points to remember:

In the case of being an only child or choosing to have only one kid, you will not experience the effects of the so-called “only child syndrome.”

Many only children are nice, sensitive, and unselfish individuals — who also have deep ties with their parents — and many of them are only children.

If you are concerned about the potential that your kid may develop certain undesirable characteristics, you should know that you have the ability to influence them in the right direction.

Encourage your children to socialise with other children from an early age, but also set boundaries and refrain from overindulging them.

End of the day, you are the only person who can decide whether you want to have one kid or several children.

After going over all of the different scenarios and giving some thought to how you want to enter the stage of parenthood, you will then be able to make your decision.

Our suggestion? To be honest, there is no one response that is inherently better or worse than another.

It is just a matter of providing your child or children with the emotional support that they need while avoiding making excessive concessions to your own personal space.

After all, the key to a happy family is a set of completely content parents.

So, what are your thoughts on this matter? Which do you think is preferable: having only one kid or having several children?